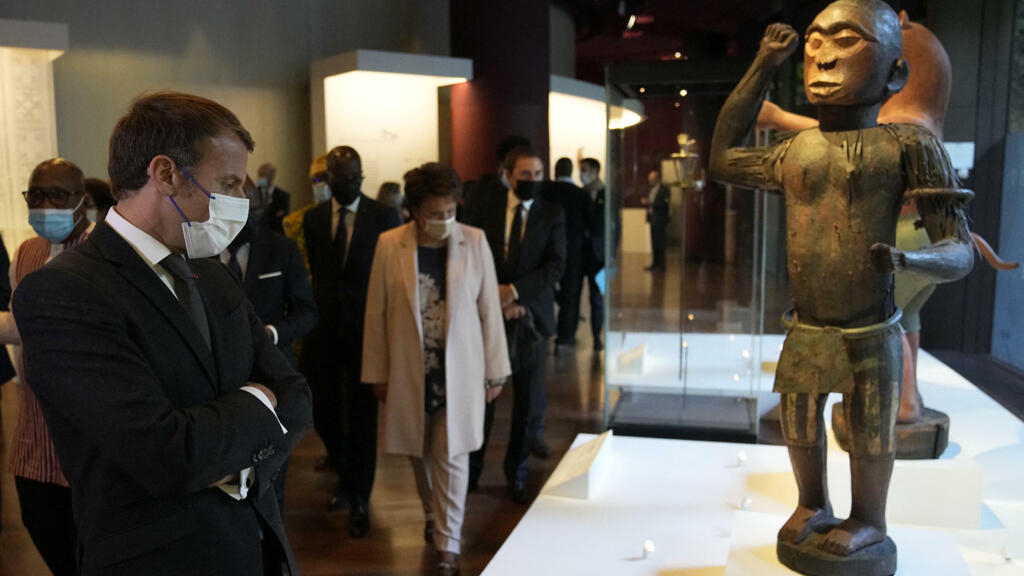 President Emmanuel Macron on Wednesday hailed a breakthrough moment as France returned 26 artefacts looted during the colonial era to Benin at a special ceremony at the Quai Branly museum in Paris. The treasures were embarking on a “journey to return back home”, said Macron.

The 26 pieces from the collection known as the “Abomey Treasures” were looted by French forces in 1892 and have been on a final display at the Quai Branly museum before being shipped to the West African country later this month.The decision to return them followed growing calls in Africa for European countries to return the colonial spoils from museums.At an official ceremony in the Quai Branly museum Wednesday, Macron said the handing over of the art pieces represented an opportunity for “the people of Africa to be able to speak their truth through their artefacts”.Shortly after his election in 2017, Macron told an audience of students at the Joseph Ki-Zerbo University in Ouagadougou, Burkina Faso, that he would “do everything possible” to return some of Africa’s cultural heritage looted by colonial France.Four years later, Macron hailed the start of what he hoped would be a “fair restitution” of looted heritage pieces.“We have fought for these items to return home,” said Macron, referring to the challenges of the restitution process, which include training curatorial teams in Benin. The effort was both worthwhile and historic, he added.  “The journey that now awaits us is a just journey. It’s the right path forward that opens up so many other paths ahead,” said Macron.

France’s restitution of the Benin artefacts has had ramifications across Europe and its former colonies, opening up debates on looted artefacts that are currently housed in museums and institutions in several West European nations.   Around 90 percent of Africa’s cultural heritage is believed to be in Europe, French art historians estimate. The Quai Branly Museum in Paris alone holds some 70,000 African objects while London’s British Museum possesses tens of thousands more.Exhibitions in a former slave-trading hubThe restitution calls culminated last year in a vote in the French parliament, where lawmakers overwhelmingly backed returning a group of artefacts to Benin and Senegal, another former French colony.Based on a report submitted by Senegalese and French academics Felwine Sarr and Bénédicte Savoy, the 26 artefacts, which were claimed by the Benin authorities, were selected for a restitution.They will be exhibited at various sites in Benin, including a former Portuguese fort in the city of Ouidah, once a slave-trading hub, while awaiting the completion of a museum in Abomey to house them.Benin’s Culture Minister Jean-Michel Abimbola called the return of the works a “historic milestone,” and the beginning of further cooperation between the two countries. The French Development Agency will give some €35 million toward the “Museum of the Saga of the Amazons and the Danhomè Kings” to be built in Abomey under a pledge signed this year. The story of the “Abomey Treasures” is as dramatic as their sculpted forms. In November 1892, Colonel Alfred Dodds led a pilfering French expeditionary force into the Kingdom of Danhomè located in the south of present-day Benin. The French troops broke into the Abomey Palace, home of King Behanzin, seizing as they did many royal objects including the 26 artifacts that Dodds donated to the Musée d’Ethnographie du Trocadéro in Paris in the 1890s. Since the 2000s, the objects have been housed at the Quai Branly.

Calendar of restitutionsIn their report, Sarr and Savoy drew up a calendar of restitutions and an inventory of the tens of thousands of objects that French colonists brought back from Africa. While the restitution of looted artefacts has been widely welcomed, it has also faced criticisms by some museum directors in Europe. Officials at London’s British Museum — which is stuck in a decades-long tug-of-war with the Greek government over a restitution of the Elgin, or Parthenon, Marbles — argue that it will open the floodgates to emptying Western museums of their collections. In his speech, Macron stressed that “the goal is not to renationalise” heritage and “to get rid of all the works” coming from abroad. But he stressed the principle of “inalienability” of the return home of looted artefacts.The official transfer of the 26 pieces is expected to be signed in Paris on November 9, and the art is expected to be in Benin a few days later(FRANCE 24 with AFP  and AP)