TASHKENT, Uzbekistan – Following the re-election of Uzbekistan’s President Shavkat Mirziyoyev on October 24, the Central Asian country has chosen the path of modern progress and hydropower by actively developing in the circle of large-scale reforms, which is an important source of power for the country’s national economy, Uzbekhydroenergo Chairman Abdugani Sanginov told New Europe in Tashkent on October 25.

“There were elections on October 24, and they were at a new level. Everything was modern. When it comes to hydropower, the president signed a decree in 2017 establishing a special organization Uzbekhydroenergo to develop green energy. Nowadays the HPP capacity is 2005 MW and hydro energy is developing in Uzbekistan because the president established this organization. There are 47 hydroelectric plants and 10-12 percent of the whole energy production is hydroenergy. The development program costs $3.5 billion,” Sanginov said in an interview. “We work with European organizations and companies to develop green energy, including French company EDF and the European Investment Bank (EIB),” he added.

Sanginov said the European Union can play an important role in supporting renewable energy sources in Uzbekistan by providing grants and soft loans for the development of RES in Uzbekistan.

Uzbekistan plans to construct new hydropower plants and modernize existing ones, which is part of the country’s national energy strategy to increase the share of renewable energy sources in the energy balance of Uzbekistan to 20% by 2030. “According to our program, we are planning to build 30 new hydro plants and we are planning to modernize 22 hydro plants. That’s why we have accepted the program of green energy. By 2030, we will increase the capacity of hydro energy to 3.5 GW,” the Uzbekhydroenergo Chairman told New Europe. “We are already planning to complete solar and wind projects,” he added.

In accordance with the program, which was approved by Mirziyoyev, consistent work is underway to efficiently use the hydropower potential of Uzbekistan, increase the share of renewable hydropower resources in the structure of electricity production, create new environmentally friendly generating capacities, carry out technical and technological re-equipment of existing HPPs, attracting foreign investments into the developing of hydropower and ensuring, on this basis, the fullest satisfaction of the needs of enterprises and the population in electric energy, he said.

Turning to the historic Samarkand region, which New Europe visited on election day on October 24, Sanginov noted that there are 5 plants in Samarkand with a capacity of 45 MW. “There are 4 ongoing projects, 3 new and one that is being modernized. Three new stations with a capacity of 18 MW. Because of the lack of water resources in Samarkand, we are planning to build only 3 plants,” he said.

Regarding projects in cooperation with foreign countries and companies, he said Uzbekhydroenergo completed six projects in 2020. “This year, we are planning to complete two new plants and modernize one plant. By 2022, we’re planning to complete 7 new projects,” he said. “Our company receives technologies from foreign companies, but we design and build the plants ourselves. We are getting a lot of preferences from the government,” he added.

Sanginov noted that his company and French power generation company EDF have reached preliminary agreements on operational ventures and organizational collaboration, specifically the construction of a pumped storage power plant (PSP) for the first time in Uzbekistan, installation of floating solar stations on reservoirs and the creation of special working groups to discuss key organizational issues.

He noted that Uzbekistan’s renewable potential is growing, and the Central Asian country is looking to play an important role in the region.

Meanwhile, Professor Shahobiddin Ashurov, vice-rector for scientific affairs and innovations at Samarkand State Institute of Foreign Languages, told New Europe in Samarkand on October 24 that hydropower and solar energy are two of the main electricity sources. “We’re doing our best to make our cities green, including Samarkand,” he said.

Ashurov also noted that the high-speed electric train from Tashkent to Samarkand, which we took to visit the historic city, takes only two hours while a car takes four hours, reducing CO2 emissions.

Samarkand, which is one of the oldest inhabited cities in Central Asia prospering from its location on the trade route between China and Europe, is also one of the country’s largest tourist attractions. “You have seen yourself the weather in Samarkand and Tashkent,” he said, noting that Tamerlane, the founder and ruler of the Timurid Empire, made Samarkand his capital, choosing it over Bukhara and Karshi. “We are doing our best to give investors the opportunity to increase our economy in doing any kind of business which also helps give our people good opportunities,” he said. 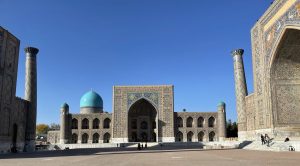 Samarkand became the first city in Uzbekistan to boost its urban sustainability planning by joining the European Bank for Reconstruction and Development’s EBRD Green Cities program.

Samarkand became the program’s 48th member overall, formalized through the signing of a Memorandum of Understanding in June. Samarkand is expected to invest in electric buses and draft a Green City Action Plan (GCAP), setting out further actions to improve the local environment.

How to Promote Green Living and Sustainability in Your Community

Over recent years France has established itself as

Why gamers are turning their backs on NFTs

Over recent years France has established itself as a key hub for VFX work, driven by

Top Minimalist Living Tips That You Should Know