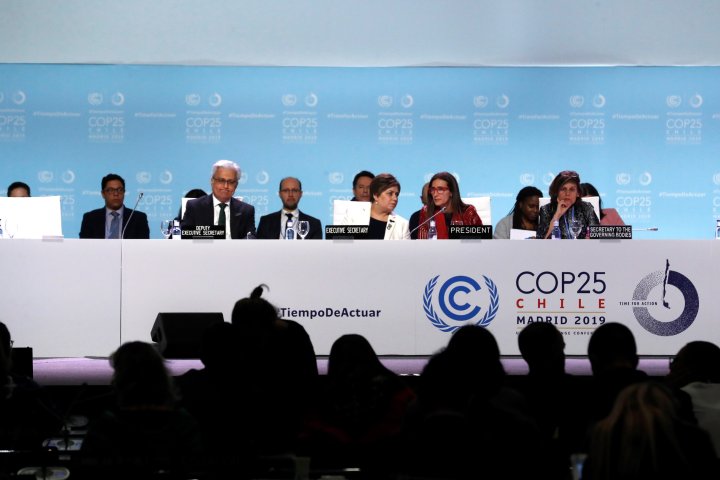 World leaders are in Glasgow this weekend to participate in the United Nations Climate Change Conference, also known as COP26.
The 26th yearly summit, which aims to bring activists together to discuss the world’s most pressing environmental concerns, will convene from Oct. 31 until Nov. 12 and is expected to focus on accelerating progress made on the Paris Agreement and the UN Framework Convention on Climate Change.But following a year of record-breaking forest fires, extreme weather and poor air quality, some experts are saying the summit is all talk, yielding little to no action.
Read more:
Climate change is ‘biggest health threat facing humanity,’ WHO says

COP26 officials say this year’s summit will prioritize reducing greenhouse gas emissions to net zero by 2050, helping countries affected by climate change protect and restore their ecosystems, pushing countries to deliver on previous promises to contribute at least $100 billion in funding per year and finalizing the rules needed to implement the Paris Agreement, according to a recent report.Leaders say “there will be a lot of work being done” this year.Speaking at a joint press conference Friday with Prime Minister Justin Trudeau, Dutch Prime Minister Mark Rutte said that he is “still positive” because “there is no way not to do this.”“The two of us will work very hard to do whatever we can to bring our colleagues along in the G20.”“What we now see is that the add up of all the plans will lead to a warming of two point seven degrees instead of the one point five, which we agreed in Paris in 2015,” he said.“There’s still a gap and there’s still a lot we need to do.”

1:30
Trudeau jets off to Europe for G20, UN climate conferences

Trudeau jets off to Europe for G20, UN climate conferences

“The fact that the G20 is immediately before COP26 allows some of the major countries around the world respond and be responsible for significant emissions, to actually meet and work in advance of hopefully what will be a very successful COP,” he said.“[This] has allowed us to strategize about how we’re going to continue to put pressure to make sure that the world is stepping up on these huge challenges.”Trudeau also said that “like the Netherlands, Canada has stepped up.”The nation has doubled its climate financing pledge and is working with “like-minded allies, including Germany and others, to ensure that the world does hit its $100 billion pledge very rapidly.”“There is much, much more to do, but we are here to certainly not just do our parts, but do everything we can to make sure that others are doing theirs,” he said.Previous summits have been used as a springboard for the creation of strategies aimed at reducing the effects of climate change. COP21 in 2015, for example, saw the adoption of the Paris Agreement by 196 nations, which has successfully forced countries and an oil company to improve their climate action, for example. Still, many conferences have ended without firm or realistic resolutions.But more recent summits have ended without resolutions on key issues. The 2019 summit was viewed as a failure by many after major polluters resisted calls to ramp up efforts to keep global warming at bay and negotiators postponed debate about rules for international carbon markets for another year. Story continues below advertisement

2:26
Ahead of COP26, thousands march for climate action in Brussels

“Canada came to #COP25 in the spirit of compromise and commitment to action,” Canadian environment minister Jonathan Wilkinson tweeted in 2019.“While there were some successes, we are disappointed that the world was not able to agree on the rules for the international carbon markets that would help us all raise our ambition in Madrid.”In 2018, the UN introduced stiff new carbon emissions targets for Canada that would see the country cut its emissions in half by 2030, but scientists claimed they were so ambitious they were “virtually impossible.”Lomborg, however, said that “everything is doable if you’re willing to pay a sufficient amount of resources.”“This is going to be phenomenally expensive,” he said. “You can’t actually just rip out the engine of economic growth for the last couple of hundred years with no cost.” Story continues below advertisement

According to Lomborg, it doesn’t matter how many climate change conferences are held. World leaders, he says, will continue to stall on drastic world-saving policies as long as they continue to pose a threat to the economy.
Read more:
‘Code red for humanity’: Climate change spiraling out of control, U.N. report says

More than that, he said voters would likely also oppose such policies if they drive up the cost of living.“If we could make green energy cheaper than fossil fuels, everyone would switch. It wouldn’t be rocket science,” he said.Until then, Lomborg said, “it’ll always be these meetings where everybody tries to twist each other’s arms.”“You’re going to get lots of beautiful promises, but you’re going to get very, very little actual reduction in global emissions even in 10, 20, 30 years,” he added.Canadians, for their part, are divided on whether addressing climate change should come at the expense of the economy.An Ipsos poll conducted exclusively for Global News in August found just 35 per cent of 1,500 Canadians who were surveyed said they believed Canada should do everything in its power to fight climate change.Meanwhile, 77 per cent said the country needs to do more to reverse the effects of climate change and 51 per cent said the federal government needs to “balance economic considerations with environmental efforts.” Story continues below advertisement

Canada’s greenhouse gas emissions have increased by 21.4 per cent from 1990 to 2019 and are driven mainly by oil and gas extraction and transport, according to the latest available data from the federal government. This equates to roughly 19.4 tonnes per person on average.

According to Lomborg, investing in more innovative green technology could help drive down greenhouse gas emissions long-term.“We spend an enormous amount of resources on inefficient technologies that feel green but don’t actually or can’t actually be scaled,” he said.“We’ve seen a slight increase, but nowhere near doubling — and doubling is not enough.”Dr. Gordon McBean, co-director of Western University’s Centre for Environment and Sustainability, told Global News that while the UN climate change conferences “don’t always produce anything,” the publicized promises to make changes helps hold world leaders accountable and puts public pressure on countries to take action. Story continues below advertisement

“If we don’t have these meetings at all, there is no likelihood of action,” he said.“If we have these meetings and people and countries make commitments, and some countries — quite a few, particularly the European countries and some other countries globally — have taken the action they committed to, that results in the international political pressure on countries that don’t do what they committed to do.”
Read more:
U.N. climate change report: Here are the key takeaways

McBean, who is also president-elect of the International Council for Science, said most countries who commit to reversing the effects of climate change at these conferences may not always meet their targets, but at the very least tend to make small movements in a greener direction.Helping under-developing nations adapt to potentially devastating effects of climate change is another part of what the conferences do, said McBean.Because of this, he said the meetings have a great impact on smaller island countries such as Oceania’s Tuvalu, who feel the brunt of the impacts of climate change and could be wiped out by rising sea levels.Commitments to create better natural disaster warning systems and guidelines for rebuilding homes that have been destroyed, and other risk reduction policies can mean the difference between life and death for smaller communities, he said, and can build a more sustainable future. Story continues below advertisement

“It’s symbolically important that we recognize that what we’re doing now has the benefits for generations to come,” McBean said.— With files from the Canadian Press and the Associated Press