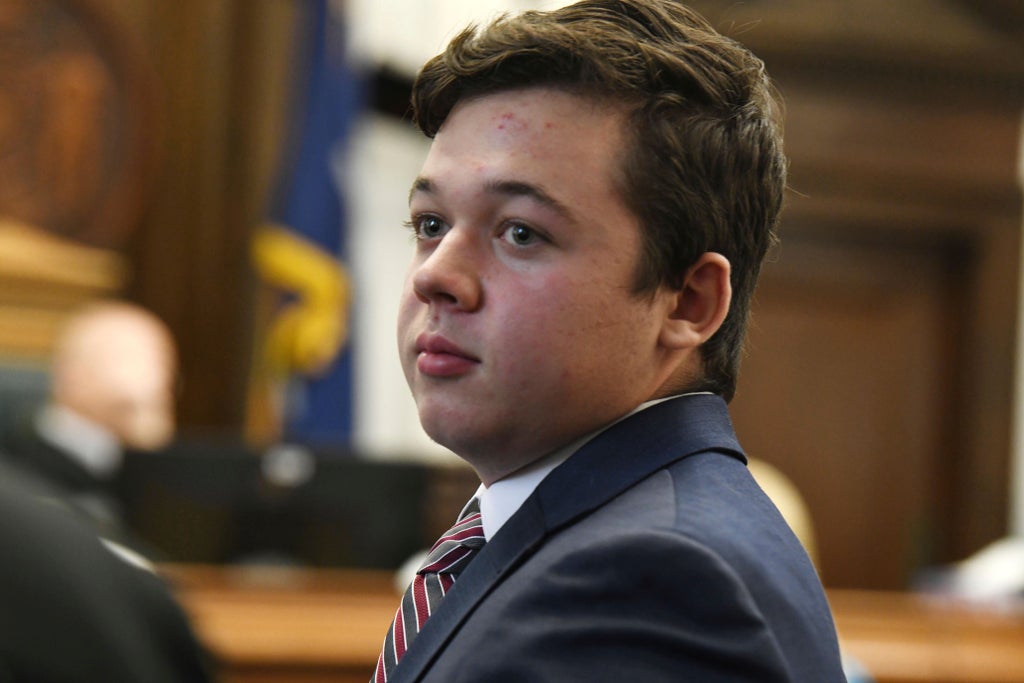 The highly politicised trial of Kyle Rittenhouse – the man accused of shooting and killing two men and injuring a third during a racial justice protest in Kenosha, Wisconsin, last year – heard that the teenager was “drawn to the chaos” of the riots.Mr Rittenhouse, 18, is facing six criminal charges including first-degree intentional homicide and first-degree reckless homicide linked to events on the night of 25 August 2020 during protests in Kenosha over the police shooting of a Black man, Jacob Blake, who was left paralysed.The then-17-year-old had travelled from his home in Illinois saying he wanted to help protect businesses from rioters. He is accused of shooting and killing Joseph Rosenbaum, 36, and Anthony Huber, 26, and wounding Gaige Grosskreutz, now 27. Mr Rittenhouse is expected to argue the shootings were in self-defence.As the trial opened on Tuesday, Kenosha County district attorney Thomas Binger established a timeline of the night of the shootings and suggested Mr Rittenhouse had crossed state lines to attend the protest, armed with an AR-15, intentionally looking for conflict.“The evidence in this case will show … the defendant, Kyle Rittenhouse … using that rifle, shot and killed Joseph Rosenbaum, an unarmed man,” he said in his opening statement.He said that many “tourists” were attracted to the protest, saying Mr Rittenhouse was “drawn to the chaos”.Mr Binger said that hundreds of people attended the protest and had smaller conflicts of their own, but pointed out only one person shot and killed anyone: Mr Rittenhouse.“Hundreds of people experienced those nights,” he said. “The only person who killed anyone was the defendant, Kyle Rittenhouse.” In his opening remarks, defence attorney Mark Richards focused on the intents of the individuals Mr Rittenhouse shot, arguing that Mr Rosenbaum became “enraged” when someone put out a dumpster fire he had allegedly started.He said that Mr Rosenbaum threatened to kill Mr Rittenhouse and chased him down, allegedly in an attempt to steal his AR-15. He also claimed that the other man Mr Huber tried to “separate [Mr Rittenhouse’s] head from his body” by striking him with a skateboard.The defence attorney pointed out that Mr Rittenhouse was under no compulsion to flee or to administer aid to those he injured. In many states a prerequisite for arguing that a person killed in self-defence is establishing that they tried to flee the threat that caused them to use deadly force, which Mr Richards suggests is not necessary in this instance.Mr Rittenhouse was at the protest ostensibly as a medic, but – as Mr Richards pointed out – was under no legal requirement to treat anyone.The case generated early criticism when Circuit Court Judge Bruce Schroeder barred prosecutors from using the term “victim” to refer to the men who were shot because it is a “loaded term.” The judge did allow the defence to refer to the men as “rioters” or “looters”.Witness testimony began after the lunch break. The first witness called to the stand was Dominick Black, who was dating Mr Rittenhouse’s sister at the time of the shooting. Mr Black purchased the AR-15 used in the shooting for Mr Rittenhouse.He told Mr Binger that Mr Rittenhouse asked him to purchase the gun using money provided by the defendant, but Mr Black said he said it was a “bad idea” because the man had not yet turned 18. They agreed that he would purchase the gun but keep it at his house until Mr Rittenhouse was 18.During the cross examination, Mr Richards suggested that Mr Black agreed to testify in order to avoid going to prison over two felony charges that are being brought against him by the Kenosha County district attorney for purchasing the firearm for Mr Rittenhouse. Mr Black agreed, but noted he had not been made any promises about what he might get out of testifying. During Mr Binger’s initial questioning he confirmed that no deals had been struck between the state and Mr Black. Mr Black confirmed to Mr Richards that he saw Mr Rittenhouse helping people with injuries during their time at the protests. Mr Rittenhouse had allegedly told people he was an “EMT” despite having no certification to make such a claim. Mr Black claimed Mr Rittenhouse had “some” first aid training. Following Mr Black’s testimony, the trial paused for another break.Jurors were selected on Monday after a flash round of questioning. Nearly a dozen potential jurors were eliminated from consideration due to biases they held going into the trial. The jury is comprised of 11 women and nine men. Only one person of colour is on the jury. Kenosha County’s population is 75 per cent white. Some jurors expressed anxiety about serving on the jury due to its political implications; Mr Rittenhouse has garnered significant support from the far right, and is loathed by many people with progressive views. “I really want to serve on a jury. I really don’t want to serve on this jury,” one potential juror said. “Either way this goes, you’re going to have half the country upset with you.”