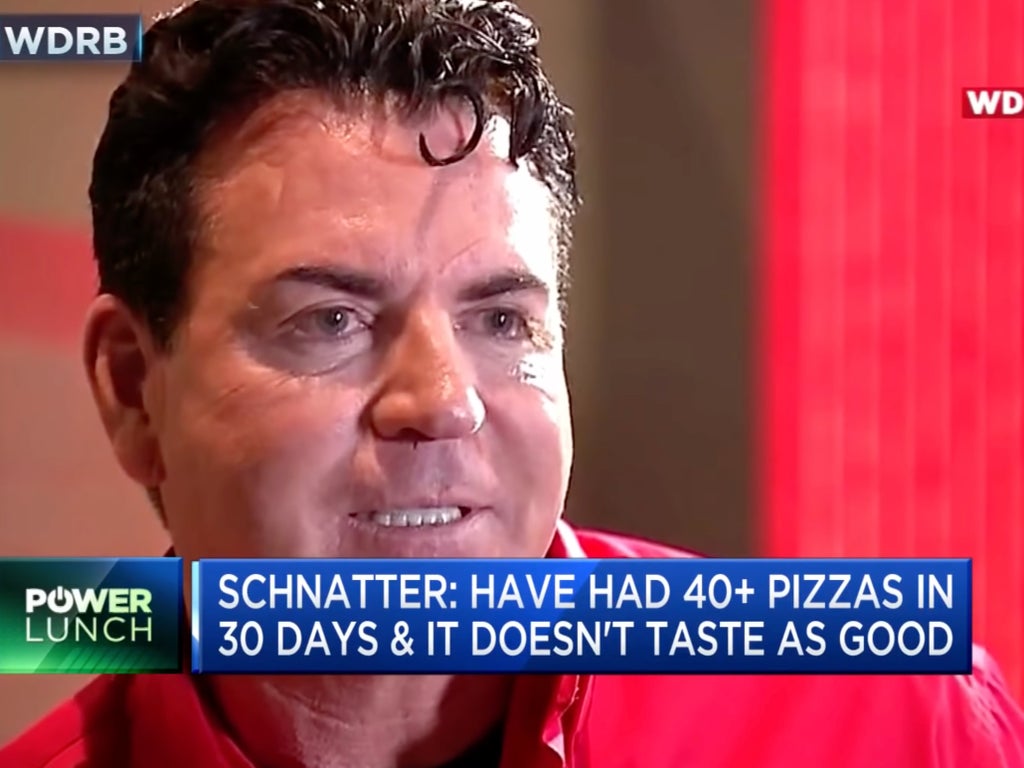 Papa John’s ousted executive and founder has revealed that he has eaten 800 pizzas in the past 18 months to show how the company has fallen without him at its helm. John Schnatter, who opened his first Papa John’s in 1984, was forced to resign as CEO and eventually chairman in 2018 following a leaked recording of him saying a racist slur. The 61-year-old apologised for his remarks at the time, but has since waged a publicity war against CEO Rob Lynch and executives at his former firm — who he claims conspired to oust him along with the “progressive elite left.”“Some were burnt. Some were undercooked”, he said to Bloomberg — adding that his representative, Mark Serrano, who formerly worked for Donald Trump was behind the pizza-eating feat. It was not the first time either, with the Papa John’s founder admitting to eating “40 pizzas in the last 30 days” during an interview with WDRB News in 2019. Mr Schnatter, without clarifying, said that the way “they’re putting the pizza together is just not fundamentally sound,” and that it was “not the same pizza”. Still calling himself “Papa John”, Mr Schnatter said in his interview that company executives and Democrats on the “progressive elite left” had been responsible for his resignations as CEO and chairman in 2017 and 2018. “The upper elite progressive left worries about me,” Mr Schnatter said of the reaction to allegations he made about the Affordable Care Act introduced by Barack Obama in 2012, and which he said would raise the price of Papa John’s by as much as 14¢ a pie.According to Bloomberg, the allegation was mentioned multiple times by Fox News at the time, and Mr Schnatter has more recently taken to appearing on right-wing news network OANN. Mr Schnatter also alleged that Laundry Service, the PR firm which worked with him at the time of his resignation as CEO of Papa John’s, was responsible because its owner, Casey Wasserman, was a Democrat party donor. She reportedly refused to return comment to Bloomberg.“I was a hometown hero. Then somewhere between store 1,000 and store 2,000, I become a bad guy,” said Mr Schnatter, who has taken both Laundry Service and Papa Johns to court with accusations that they conspired against him. The Papa John’s founder, who was sponsoring the NFL at the time, was revealed to have informed shareholders and executives that the league “hurt” his firm because it had not responded to a furore around players taking the knee —as a stand against racism. He resigned as CEO, but in another call was heard saying that NFL players were “all on steroids or pot, and now [NFL Commissioner Roger Goddell’s] going to let them protest.” “What bothers me is Colonel Sanders called Blacks ‘[n-word], I’m like, ‘I’ve never used that word,’” he said in another call, after which he was forced to resign as chairman. He has since alleged that it was a training exercise set-up by Papa John’s executives and its former PR agency to prepare for answering questions about racism — and by which he was recorded. The Independent has approached Papa John’s and Laundry Service for comment.

2021 is entering its final quarter, but the

Prince Harry serves ‘another blow’ to the Queen

Ready for victory in the new year, GRAMMY® Award-winning rapper, singer, songwriter, and producer BEAM kicks off 2022 with a

Having been an avid reader and sporadic contributor to Speedhunters in the past, coming onboard with